The University Cities Forum will discuss the concept of smart specialisation 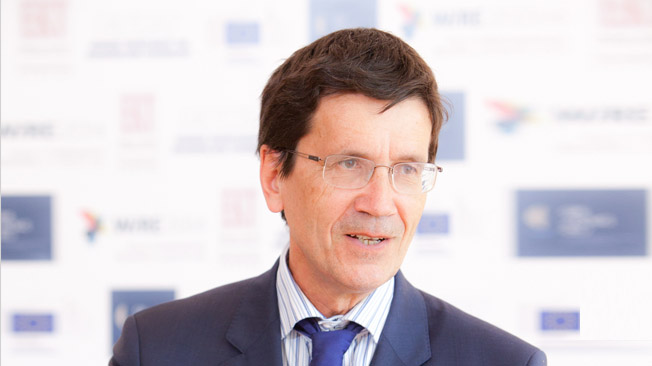 Dominique Foray, Full Professor of the Ecole Polytechnique Fédérale de Lausanne (EPFL), holds the Chair of Economics and Management of Innovation (CEMI). He is a member of the National Research Council (Switzerland); the Advisory Board of the Swiss Economic Institute (KOF); the World Economic Forum’s Global Agenda Council; and a foreign member of the Center of Capitalism and Society (Columbia University, New York). He is also a new member of the Expert Commission for Research and Innovation of Germany.

From 2008 to 2011, he served as chairman of the expert group “Knowledge for Growth”; a group of prominent economists created to advise Commissioner J. Potocnik (European Commission, DG research). This is during his service as member of this Group that he developed the concept of smart specialisation (together with P.A.David and B.Hall) that is now a key policy mechanism of the EU (cohesion policy).

The concept was developed to minimize the gap in the level of innovative development and labor productivity between the European Union and the United States. The basic prerequisite for creating the concept was the need to ensure the competitiveness of regions that, in conditions of limited funding for science and innovation, can not support sustainable growth in innovative sectors, for example, electronics, biomedicine and others which are subject to losing their sales markets and sources of income in the context of the ongoing globalization of the economy.

The concept of smart specialisation allows to make a balanced decision on how to concentrate scientific, material and investment resources in a more efficient way on a limited number of priority economic activities so that regions can remain competitive on a global scale.

The implementation of the concept creates an opportunity for structural changes in the regional economy – diversification, modernization of existing industries and creation of the new ones. The basis of the concept is the search for a combination of unique resources, the potential of the territory and technological capabilities, which would lead to the generation of new sectors of the economy. These combinations are not determined through strict prioritization of the economic sectors – their division into priority and not priority, advanced and lagging behind, but on the basis of an entrepreneurial activity analysis.

Smart specialisation is a methodology for identifying priority areas for the regional development on the basis of specific features analysis in the context of sectoral organization. The concept implies the analysis of the system of basic knowledge and competencies accumulated in a specific region, involving the participants in the regional economic system in the process of discussion as well as attracting external expertise from representatives of other regions and industry experts.

The principle of smart specialisation is at the heart of regional innovation strategies under development (Regional Research and Innovation Strategy for Smart Specialisation – RIS3), which are integrated and tailored for transformation program of the specific territory.

The methodology of smart specialisation is applied in the designing of strategies for economic and innovative development of more than 130 regions and countries of Europe and recommended by the European Commission for application in all EU territories. The existence of an approved Smart Specialization Strategy is the rationale for obtaining funding for regional development programs from the budgets of the European Union Development Fund. According to the European Commission, the RIS3 program is currently coordinating the research and innovation budget of € 41 billion euro, as well as the program for economic transformations in regions from other EU programs in the amount of more than 250 billion euros.

Dominique Foray is recognized as one of the world’s leading experts in the field of economic policy aimed at a knowledge-based economy development. D. Foray is currently working on evidence-based policy research to explain the hidden factors and reasons of the Swiss outstanding position in terms of research and innovation.

Reference information: The 2nd University Cities Forum – Leveraging University Vitality for Urban & Regional Development – will be hosted on November 30th – December 2nd 2017 in Tomsk by National Research Tomsk State University. The main objective of the Forum is to form a joint agenda to increase the university’s influence on the development of the new urban and regional economy, the concentration of high-tech companies in cities as well as the development of university campuses as centers of gravity for businesses. The Forum’s program includes three tracks:University and the new economy of the city/region, University in complex urban ecosystem, University and disruptive social changes.